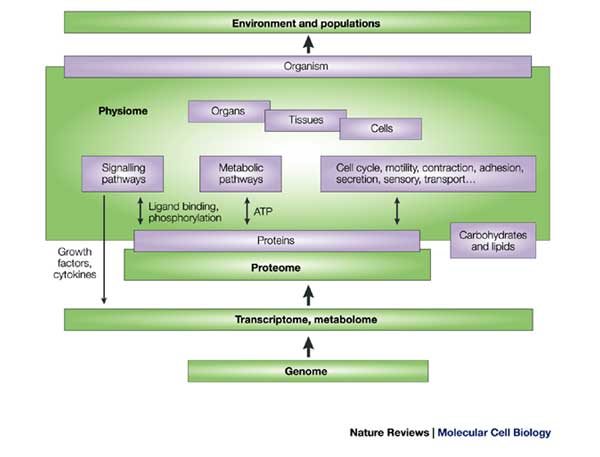 CHEMICAL LEVEL – includes all chemical substances (atoms, ions, & molecules) necessary for life (e.g., genes and proteins or, shown below, a small portion – a heme group – of a hemoglobin molecule); together form the next higher level 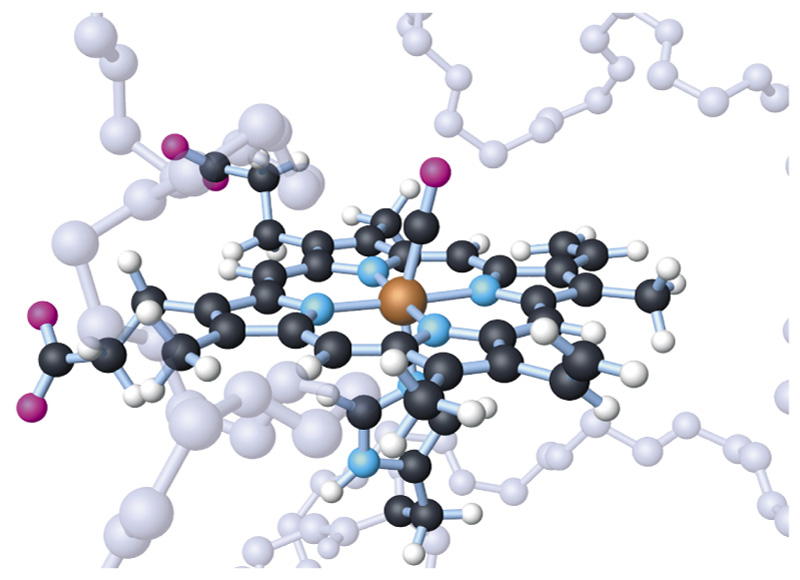 CELLULAR LEVEL – cells are the basic structural and functional units of the human body & there are many different types of cells (e.g., muscle, nerve, blood, and so on)

TISSUE LEVEL – a tissue is a group of cells that perform a specific function and the basic types of tissues in the human body include epithelial, muscle, nervous, and connective tissues

ORGAN LEVEL – an organ consists of 2 or more tissues that perform a particular function (e.g., heart, liver, stomach, and so on)

SYSTEM LEVEL – an association of organs that have a common function; there are 11 major systems in the human body, including digestive, nervous, endocrine, circulatory, respiratory, urinary, reproductive, muscular, lymphatic, skeletal, and integumentary.

Voyage inside the cell

Two types of cells that make up all living things on earth: prokaryotic and eukaryotic. Prokaryotic cells (check this video) , like bacteria, have no ‘nucleus’, while eukaryotic cells, like those of the human body, do. So, a human cell is enclosed by a cell, or plasma, membrane. Enclosed by that membrane is the cytoplasm (with associated organelles) plus a nucleus. 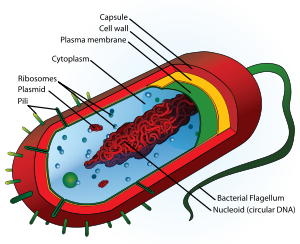 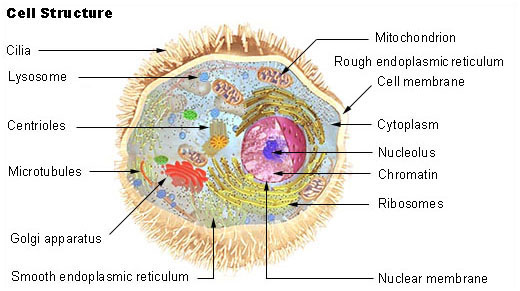 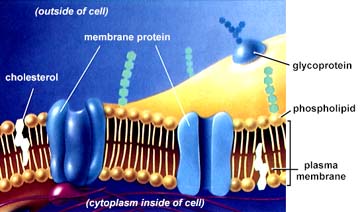 At the heart of the immune response is the ability to distinguish between self and nonself.
Every body cell carries distinctive molecules that distinguish it as “self.” Normally the body’s defenses
do not attack tissues that carry a self marker; rather, immune cells coexist peaceably with other body cells in
a state known as self-tolerance (Source: National Cancer Institute). 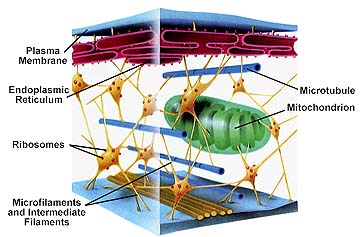 Inner life of a cell (microtubules start at about 3:20) 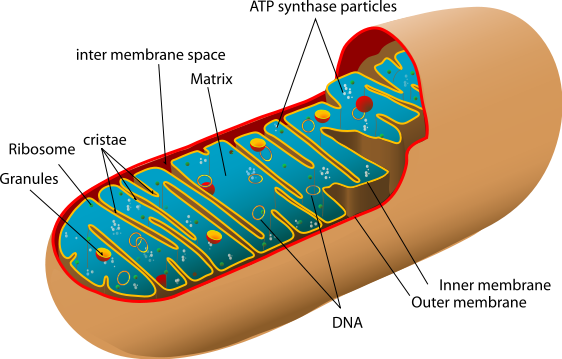 Mitosis and the role of centrioles

Ovulation (role of cilia explained beginning at about 1:40)

DNA (Deoxyribonucleic acid) – controls cell function via transcription and translation (in other words, by controlling protein synthesis in a cell) 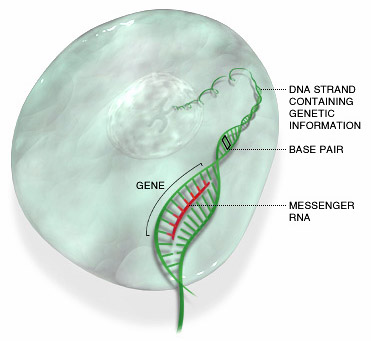 Translation – mRNA then moves from the nucleus into the cytoplasm & is used to produce a protein (check this animation: translation and this video)

From RNA to protein synthesis

Used with permission of John Kimball

COMPONENTS OF THE CELLULAR ENVIRONMENT

Ions = atoms or molecules with unequal numbers of electrons and protons:

1 – Passive processes – require no expenditure of energy by a cell:

2 – Active processes – require the expenditure of energy by cells:

Used with permission of Gary Kaiser

Shown here is one way that active transport can occur. Initially, the membrane transport protein (also called a carrier) is in its closed configuration which does not allow substrates or other molecules to enter or leave the cell. Next, the substance being transported (small red spots) binds to the carrier at the active site (or binding site). Then, on the inside of the cell, ATP (Adenosine TriPhosphate) binds to another site on the carrier and phosphorylates (adds one of its phospate groups, or -PO4, to) one of the amino acids that is part of the carrier molecule. This attachment of a phosphate group to the carrier molecule causes a conformational change in

(or a change in the shape of ) the protein so that a channel opens between the inside and outside of the cell membrane. Then, the substrate can enter the cell. As one molecule of substrate enters, the phosphate group comes off the carrier and the carrier again ‘closes’ so that no other molecules can pass through the channel. Now the transport protein, or carrier, is ready to start the cycle again. Note that as materials are transported into the cell, ATP is used up and ADP and -PO4 accumulate. More ATP must be made by glycolysis and the Kreb’s cycle.

Characteristics of Facilitated Diffusion & Active Transport – both require the use of carriers that are specific to particular substances (that is, each type of carrier can ‘carry’ one type of substance) and both can exhibit saturation (movement across a membrane is limited by number of carriers & the speed with which they move materials; see graph below). 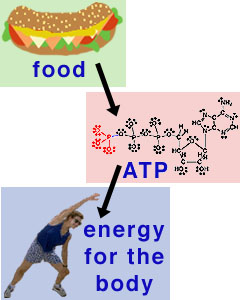 Cells require energy for active transport, synthesis, impulse conduction (nerve cells), contraction (muscle cells), and so on. Cells must be able to ‘capture’ and store energy & release that energy in appropriate amounts when needed. An important source of energy for cells is glucose (C6H12O6): 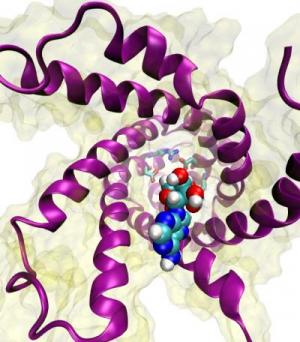 View of the ATP/ADP carrier (AAC) from the cytoplasm, with the ADP molecule (blue, aqua, red and white spheres)
at the entrance, ready to be funneled into the carrier.
(Credit: Image courtesy of Emad Tajkhorshid and Yi Wang, U. of Illinois)

Exchange of ATP and ADP across the mitochondrial membrane replenishes the cytoplasm with newly synthesized ATP and provides the mitochondria with the substrate ADP for oxidative phosphorylation. This exchange requires a molecule known as AAC (ADP/ATP carrier). AAC is a membrane protein that acts like a revolving door – transporting ADP into mitochondria (to be converted to ATP) and ATP out of mitochondria and into the cytoplasm (Wang and Tajkhorshid 2008).

In mitochondria, the hydrogens associated with NADH and FADH2 are acted upon by enzymes that cause the release of their electrons to create a hydrogen ion (H+).

The electrons are then passed, in a series of reactions driven by enzymes, from protein to protein (and these proteins are located in the inner membrane of mitochondria) in what is called the electron transport chain. As these electron transfer reactions occur, energy is released that is used to pump the hydrogen ions across that membrane and into the area between the two mitochondrial membranes. This creates a concentration gradient that causes the hydrogen ions to pass back through the inner membrane and, specifically, through an enzyme called ATP synthase. This flow of hydrogen ions causes the ATP synthase molecule to rotate and this, in turn, converts ADP + P into ATP (a reaction called phosphorylation). So, what occurs in mitochondria involves electron transfer (or oxidation; the loss or transfer of an electron) + phosphorylation, or, in other words, oxidative phosphorylation. Oxidative phosphorylation produces lots of energy, but requires hydrogen (NADH and FADH2). 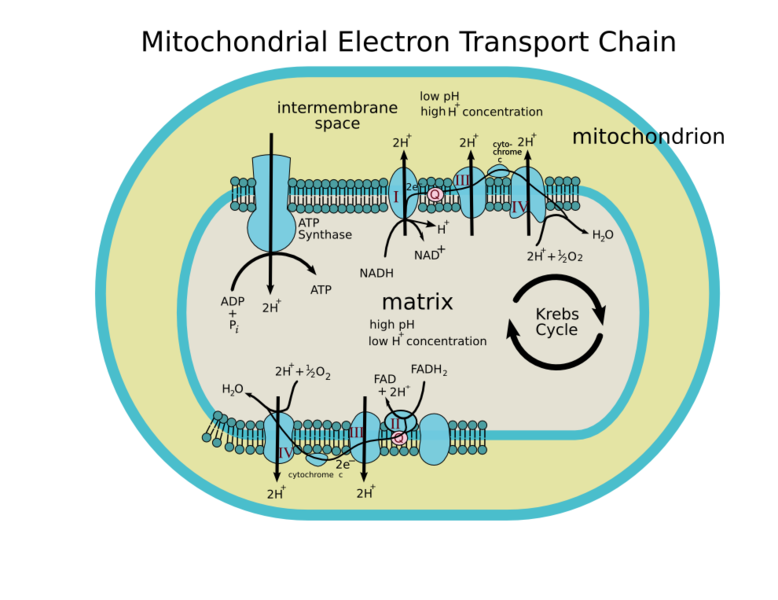 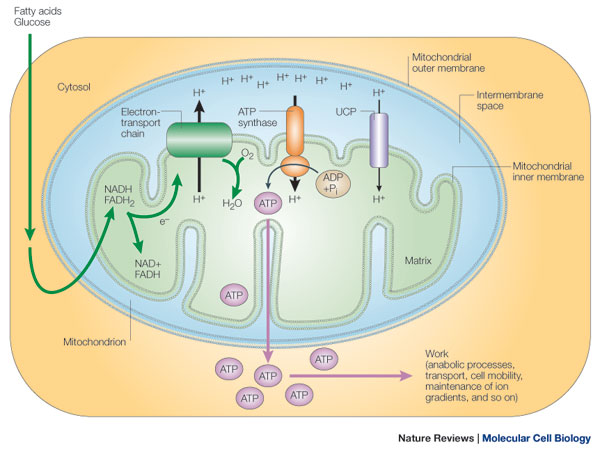 The cellular metabolism of substrates such as glucose and fatty acids (green arrows in the figure) generates hydrogens and, specifically, hydrogen carriers — NADH and FADH2. NADH and FADH2 donate electrons to the electron-transport chain (check this animation) that consists of proteins located in the mitochondrial inner membrane. Electrons are ultimately transported to molecular oxygen that is reduced to water in the last step of the electron-transport chain. As electrons are transferred along the electron-transport chain, the energy released is used to pump protons (H+) from the mitochondrial matrix into the mitochondrial intermembrane space. The energy produced drives the synthesis of ATP from ADP and inorganic phosphate (Pi) by ATP synthase. ATP is then made available to the cell for various processes (e.g., active transport) that require energy (Source: Krauss et al. 2005).

Where do the hydrogens (NADH and FADH2) come from?

Sources include GLYCOLYSIS and the KREB’S CYCLE.

Glycolysis involves the breakdown of glucose. Cells obtain glucose from the blood. Blood glucose levels are maintained by the interaction of two processes: glycogenesis and glycogenolysis. Glycogenesis is the production of glycogen from  glucose and occurs (primarily in the liver and skeletal muscles) when blood glucose levels are too high (for example, after a meal).

Glycogenolysis is the reverse process – the breakdown of glycogen to release individual molecules of glucose. This occurs when blood glucose levels begin to decline (for example, several hours after a meal). The interaction of these two processes tends to keep blood glucose levels relatively constant.

Glucose taken up by cells from the blood is used to generate energy in a process called glycolysis. 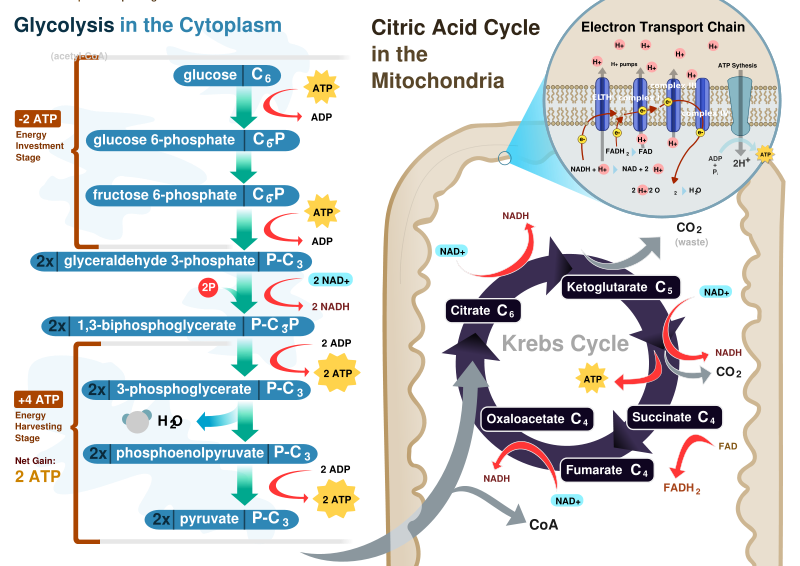 Glycolysis & the Kreb’s Cycle (Source: Wikipedia)
In the first few steps of glycolysis, glucose is converted into fructose-1,6-diphosphate. These reactions, like all chemical reactions, involve making and breaking bonds between atoms, and this sometimes requires energy. Even though glycolysis, overall, releases energy, some energy must be added initially to break the necessary bonds and get the energy-producing reactions started. This energy is called activation energy. In the above diagram, energy (i.e., a molecule of ATP) is needed at steps 1 & 3. So, before the energy-producing reactions of glycolysis begin, a cell must actually use two molecules of ATP.

Overall, glycolysis can be summarized as: 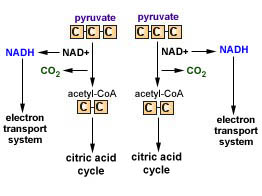 Used with permission of Gary Kaiser
the 2 Pyruvic Acid are converted into 2 Acetyl CoA & these reactions produce 2 molecules of NADH. Those NADH molecules go through oxidative phosphorylation and produce 6 more ATP (3 ATP per NADH). 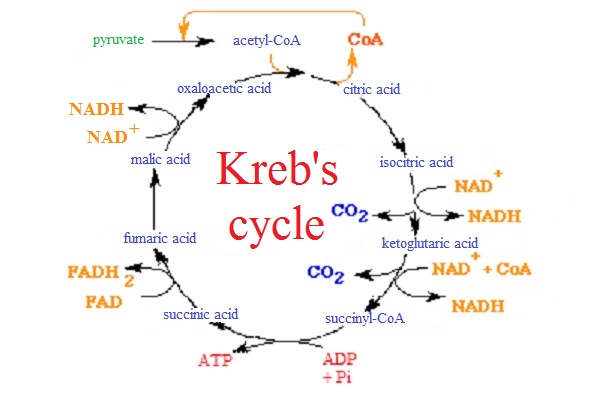 2 Acetyl CoA go through this cycle of reactions and produce 2 ATP (= GTP in the above diagram) + 6 NADH + 2 FADH2 plus the waste products carbon dioxide + water. The 6 molecules of NADH are then used to produce 18 ATP (3 ATP per NADH), and the 2 FADH2 molecules generate 4 more ATP.

OVERALL ATP PRODUCTION from glucose = 8 (from glycolysis) + 6 (from the hydrogens produced when the 2 pyruvic acid are converted into 2 acetyl CoA) + 24 (from the Kreb’s cycle) for a GRAND TOTAL OF 38:

Glucose (carbohydrates) are not the only source of energy for cells. Fats (or lipids), like triglycerides, are also metabolized to produce energy.

This reaction not only produces lots of Acetyl CoA (or acetate), but lots of hydrogens. The Acetyl CoA goes through the Kreb’s Cycle, while the hydrogens go through Oxidative Phosphorylation.


Proteins are also used as a source of energy.

Proteins are first broken down into amino acids. The nitrogen component of amino acids is then removed (in a reaction called DEAMINATION), and these deaminated amino acids are then converted into Acetyl CoA which passes through the Kreb’s Cycle to make more ATP. 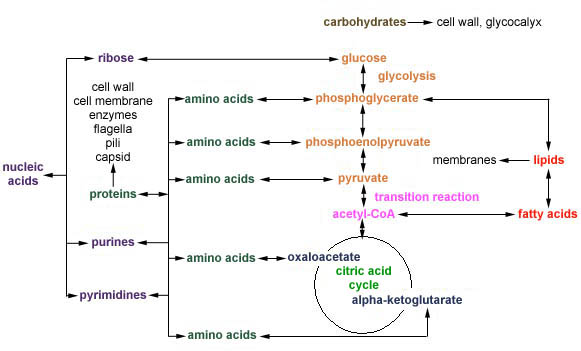