Ok got it. Now, are you ready for a recap? Here’s a lecture notes remix:

Respiration: the process of gas exchange between the atmosphere and body cells

Organs of the Respiratory System 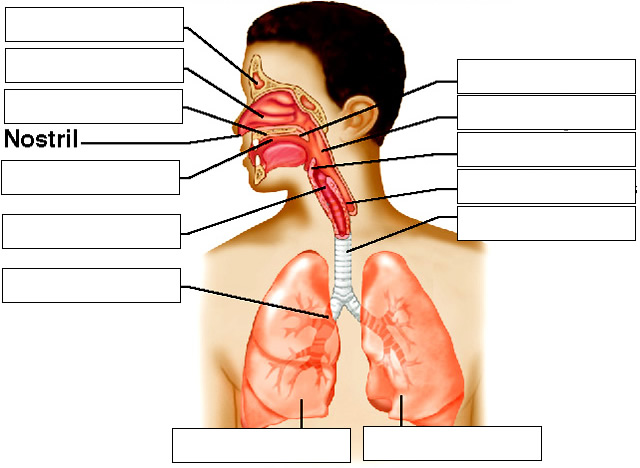 * deviated septum – when the septum bends to one side

— air is warmed as it enters the nasal cavity, sticky mucus traps particles which are pushed toward the pharynx and swallowed.

Paranasal Sinuses – spaces within the maxillary, frontal, ethmoid and sphenoid bones; reduce the weight of skull and are resonant chambers for voice.

Pharynx – behind the oral cavity, between the nasal cavity and larynx (space, not a structure) – nasopharynx, oropharynx, laryngopharynx

Trachea (windpipe) – flexible cylinder, about 12.5 cm long, extends downward in front of the esophagus
– contains about 20 C-shaped pieces of hyaline cartilage that prevent trachea from collapsing

Lungs – soft spongy, cone-shaped organs in the thoracic cavity. The visceral pleura attaches to each lung surface and folds back to form the parietal pleura. The space between the visceral and parietal pleura is called the pleural cavity. Pleural cavity contains serous fluid to lubricate surfaces during breathing.

1. The diaphragm moves downward and the atmospheric pressure in the alveoli falls, which forces air into the airways
2. External intercostals muscles contract, raising ribs and sternum and enlarges the cavity even more
3. Pleural membranes held tightly together, move with the contractions of muscles
4. Surface tension in the alveoli (caused by water) makes it difficult to inflate them. Surfactant reduces tendency of alveoli to collapse. (Lack or surfactant in preemies can cause respiratory distress)
5. A deeper breath can be achieved through other muscles – pectoralis minor and sternocleidomastoid
6. The first breath of a newborn is the hardest because all of the alveoli are only partially inflated.

*Since our breathing is based on atmospheric pressure (and the difference in the pressure in the lungs), if there is a hole in the pleural cavity, the lung collapses (deflates). This can happen if a person is stabbed or a broken rib pierces the lung.

NON-RESPIRATORY MOVEMENTS – Used to clear air passageways (coughing, sneezing) or express emotion (laughter, crying) – result from reflexes — A hiccup is a sudden inspiration due to a spasm of the diaphragm, air striking vocal folds makes the sound —A yawn may be caused by not enough blood becoming oxygenated, a yawn forces a deep breath

Spirometry – measures volumes of air moving in and out of the lungs. 4 distinct respiratory volumes
Respiratory cycle – 1 inspiration + the following expiration

1. Resting Tidal volume – amount of air that enters the lungs during 1 cycle
2. Inspiratory and 3. Expiratory reserve volume – after forced inhalation or exhalation
4. Residual Volume – air remaining in the lungs even after forceful exhalation
*** Combining two or more of the respiratory volumes = respiratory capacities.

Breathing is an involuntary act, the muscles are under voluntary control (we can choose to hold our breath)

Oxygen combines with hemoglobin in the blood (oxyhemoglobin / deoxyhemoglobin)
Hypoxia – oxygen defiency. Can be caused by inadequate bood flow, poisons (cyanide and carbon monoxide)
Asphyxia – excess CO2 in the blood, lack of oxygen

ILLNESSES RELATED TO THE RESPIRATORY SYSTEM