After Reviewing these exercises, you will be able to:

True/False
Mark each statement as true (T) or false (F).
_______1. A reduced breathing rhythm that fails to meet the body’s gas exchange demands is
called hyperventilation.
_______2. Abnormally shallow breathing is called hypopnea.
_______3. A nosebleed is clinically called hemoptysis.
_______ 4. A narrowing of the airway by the contraction of smooth muscles in the walls of the
tiny tubes within the lungs known as bronchioles is called bradypnea.
_______5. The common term for atelectasis is collapsed lung.
_______6. Another name for pertussis is whooping cough.
_______7. A blood clot that moves along with the bloodstream is called an embolism.
_______8. A respiratory disease that is characterized by atelectasis known as respiratory distress syndrome.
_______ 9. Effusion refers to the leakage of fluid.
_______10. A fungal infection of the upper respiratory tract, which often spreads to the lungs and
other organs, is called coryza. 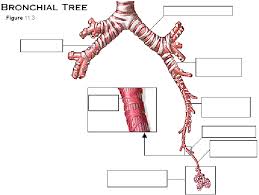 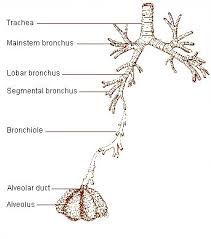 3) The walls of the alveoli are composed of two types of cells, type I and type II. The function of type II is to ________. A) secrete surfactant B) trap dust and other debris C) replace mucus in the alveoli D) protect the lungs from bacterial invasion

6) Which of the following maintains the patency (openness) of the trachea? A) surface tension of water B) surfactant C) cartilage rings D) pseudostratified ciliated epithelium

9) The statement, “in a mixture of gases, the total pressure is the sum of the individual partial pressures of gases in the mixture” paraphrases ________. A) Henry’s law B) Boyle’s law C) Dalton’s law D) Charles’ law

10) Surfactant helps to prevent the alveoli from collapsing by ________. A) humidifying the air before it enters B) warming the air before it enters C) interfering with the cohesiveness of water molecules, thereby reducing the surface tension of alveolar fluid D) protecting the surface of alveoli from dehydration and other environmental variations

13) The most powerful respiratory stimulus for breathing in a healthy person is ________. A) loss of oxygen in tissues B) increase of carbon dioxide C) pH (acidosis) D) pH (alkalosis)

14) Nerve impulses from ________ will result in inspiration. A) the ventral respiratory group B) the chemoreceptor center C) Broca’s center D) the preoptic nucleus of the hypothalamus

16) Which of the following statements is incorrect? A) During fetal life, lungs are filled with fluid. B) Respiratory rate is lowest in newborn infants. C) Descent of the diaphragm results in abdominal breathing. D) The chest wall becomes more rigid with age.

18) Which of the following does not influence the increase in ventilation that occurs as exercise is initiated? A) psychic stimuli B) decrease in lactic acid levels C) proprioceptors D) simultaneous cortical motor activation of the skeletal muscles and respiratory center

20) Which of the following is not an event necessary to supply the body with O2 and dispose of CO2? A) pulmonary ventilation B) blood pH adjustment C) internal respiration D) external respiration

21) Which of the following is not true of the respiratory tract from the medium bronchi to the aveoli? A) Cartilage gradually decreases and disappears at the bronchioles. B) Resistance to air flow increases due to the increase in cross-sectional diameter. C) Proportionally, smooth muscle decreases uniformly. D) Lining of the tubes changes from ciliated columnar to simple squamous epithelium in the alveoli.

22) Which of the following determines lung compliance? A) airway opening B) flexibility of the thoracic cage C) muscles of inspiration D) alveolar surface tension

24) Which of the choices below determines the direction of respiratory gas movement? A) solubility in water B) partial pressure gradient C) the temperature D) molecular weight and size of the gas molecule

25) Possible causes of hypoxia include ________. A) too little oxygen in the atmosphere B) obstruction of the esophagus C) taking several rapid deep breaths D) getting very cold

26) The lung volume that represents the total volume of exchangeable air is the ________. A) tidal volume B) vital capacity C) inspiratory capacity D) expiratory reserve volume

28) Which of the following is not a stimulus for breathing? A) rising carbon dioxide levels B) rising blood pressure C) arterial Po2 below 60 mm Hg D) arterial pH resulting from CO2 retention

29) Respiratory control centers are located in the ________. A) midbrain and medulla B) medulla and pons C) pons and midbrain D) upper spinal cord and medulla

32) Oxygen and carbon dioxide are exchanged in the lungs and through all cell membranes by ________. A) osmosis B) diffusion C) filtration D) active transport

37) Which of the following is not found on the right lobe of the lung? A) middle lobe B) cardiac notch C) horizontal fissure D) oblique fissure

38) Which of the choices below is not a role of the pleura? A) allows the lungs to inflate and deflate without friction B) helps divide the thoracic cavity into three chambers C) helps limit the spread of local infections D) aids in blood flow to and from the heart because the heart sits between the lungs

40) Factors that influence the rate and depth of breathing include ________. A) thalamic control B) voluntary cortical control C) stretch receptors in the alveoli D) composition of alveolar air

41) Which of the following provide the greatest surface area for gas exchange? A) alveolar sacs B) alveoli C) respiratory bronchioles D) alveolar ducts

45) Which center is located in the pons? A) pontine respirator group (PRG) B) expiratory C) inspiratory D) pacemaker neuron center

46) The nose serves all the following functions except ________. A) as a passageway for air movement B) as the initiator of the cough reflex C) warming and humidifying the air D) cleansing the air

49) Select the correct statement about the neural mechanisms of respiratory control. A) The pons is thought to be instrumental in the smooth transition from inspiration to expiration. B) The dorsal respiratory group neurons depolarize in a rhythmic way to establish the pattern of breathing. C) The pontine respirator group (PRG) continuously stimulates the medulla to provide inspiratory drive. D) The ventral respiratory group is contained within the pons.

51) The factors responsible for holding the lungs to the thorax wall are ________. A) the smooth muscles of the lung B) the diaphragm and the intercostal muscles alone C) the visceral pleurae and the changing volume of the lungs D) surface tension from pleural fluid and negative pressure in the pleural cavity

53) Most inspired particles such as dust fail to reach the lungs because of the ________. A) ciliated mucous lining in the nose B) abundant blood supply to nasal mucosa C) porous structure of turbinate bones D) action of the epiglottis

56) Select the correct statement about oxygen transport in blood: A) During normal activity, a molecule of hemoglobin returning to the lungs carries one molecule of O2. B) During conditions of acidosis, hemoglobin is able to carry oxygen more efficiently. C) Increased BPG levels in the red blood cells enhance oxygen-carrying capacity. D) A 50% oxygen saturation level of blood returning to the lungs might indicate an activity level higher than normal.

57) Which of the disorders below is characterized by destruction of the walls of the alveoli producing abnormally large air spaces that remain filled with air during exhalation? A) pneumonia B) tuberculosis C) emphysema D) coryza

57. Which is the last stop of the urinary track?
Comments are Closed on this Post